In Memory of
Nathan Kade
Soden
1992 - 2020
Click above to light a memorial candle.
Memorial Candle Tribute From
Jackson's Funeral Homes Inc.
"We are honored to provide this Book of Memories to the family."
View full message >>>
Send Flowers
Plant a Tree In Memory of Your Loved One
Click Here
Menu

In the event that there is an error
in the information presented,
please contact the funeral
home by clicking here. 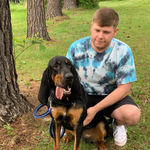 He is survived by his two best friends, Karter James Soden, his nephew, wrestling partner and Star Wars nemesis and Barlow the Bloodhound, who saved his life when he needed it the most. He is also survived by his niece Kensley Grace Soden, who he considered the best thing that ever happened to humankind.

Kade shared his life with his girlfriend, Elizabeth Scotsman, in Jonesboro where they spent much of their time walking their dogs, hiking and watching obscure old movies.


He is preceded in death by his Grandfather, George S. Haines, Great Grandparents, Orbie and Ruby Soden, James and Irene Morgan, Lysle and Margaret Haines and Byron and Marie Ebbert.

Kade loved the craft beer community. People from all over the United States knew that he was so well versed in all things craft beer. He was "the beer guy" everywhere he went, and he couldn't wait to talk about it to anyone who would listen.

Kade worked as a line technician for O'Conner's Distribution and made countless friends doing the thing he loved.

He loved Jesus, his family and his dog. But he loved everyone else too. He had so many special friends. There was never a question where Kade's loyalty was concerned. Old friends, new friends, people he barely knew. Kade didn't want anyone walked on or taken advantage of, he wouldn't stand for it. Fortunately, this leaves us with many Kade Soden stories to keep us endlessly entertained.

We will be having a graveside service at Gracelawn Cemetery on October 22, 2020 at 2:00 pm. This is for family, friends and community. After, at 3:00 pm. we will be having a celebration of life at the Tuckerman City Park. During, we will be having an "open mic night" in true Kade Soden fashion so we can stand up and tell Kade stories, good, bad and funny.

Please consider wearing a Lucero, WPF or Tuckerman High School shirt. as you know, Kade is already over all of this fuss and wants it as casual as possible.

We are also honored that Kade made the decision to be an organ donor. He was able to share his heart, lungs, kidneys, liver, eyes and tissue. We will be forever grateful that he was able to help so many people.

His Uncle Charlie Soden will be officiating, and his Mother will be speaking about his life.